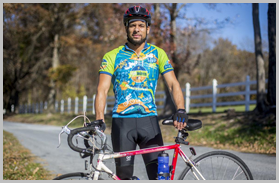 Manuel “Manny” Castro went from never considering cycling to casually training on his wife’s pink mountain bike to eventually riding over 500 miles around the country to spread kidney disease awareness. Castro is a Grottoes resident who joined the nephrology field over 10 years ago in hopes to channel his compassion into saving lives. After becoming a patient care technician at DaVita, Castro was empowered to register as a rider for Tour DaVita. 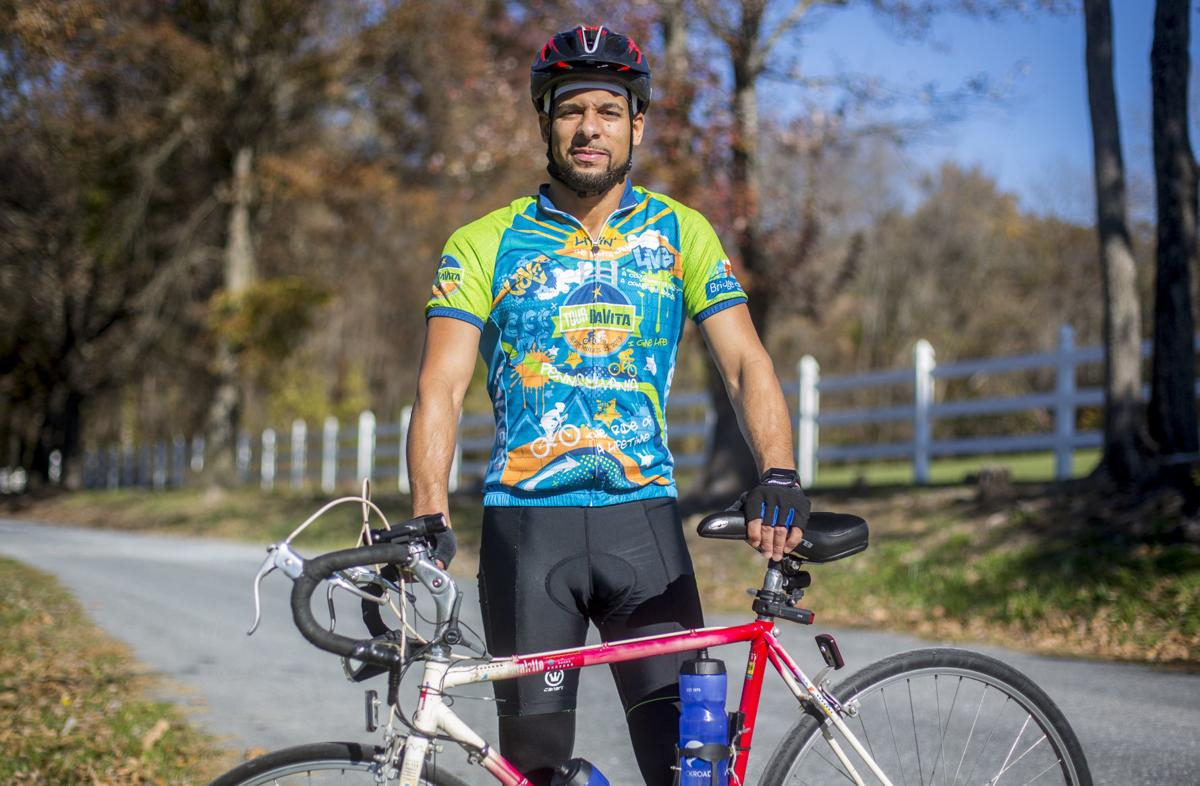 Manuel Castro, of Grottoes, poses for a photo with his bicycle. Castro rode in the Tour DaVita through Pennsylvania in September to raise funds to help fight childhood kidney disease.

DaVita, an international kidney care facility with a center in Harrisonburg, has raised $8 million through the annual bike tour since 2013 for sister operation Bridge of Life, which provides educational and medical kidney care globally.

“I really wanted to do it. I was like, you know, if it’s to raise awareness, they send medical mission teams across the U.S. and abroad to help out in other countries. I was like, I’m for it. So I did it,” Castro said.

As a rider, Castro raised $250 to ride in the three-day, 250-mile tour around Oregon alongside over 500 other cyclists.

Emily Tidwell, wisdom creative services senior manager for DaVita, said every rider has a unique story behind why they join the race, but because nearly 75% of participants work for DaVita, most ride to honor their patients in dialysis.

“They’re riding because they know that a patient has been in that chair for four hours a day, three days a week, and they believe that a way of giving back to those patients is that they ride a bike for three days for approximately 250 miles,” Tidwell said.

Lori Vaclavik, executive director of Bridge of Life, said the race is the primary source for the nonprofit’s budget, which supports and invests in kidney care in 30 countries.

“We are saving the lives of about 1,000 people every year who are getting dialysis treatment, who otherwise likely would have had no treatment available. And we are, I’m sure, saving the lives of thousands more through our screening and education program,” Vaclavik said. 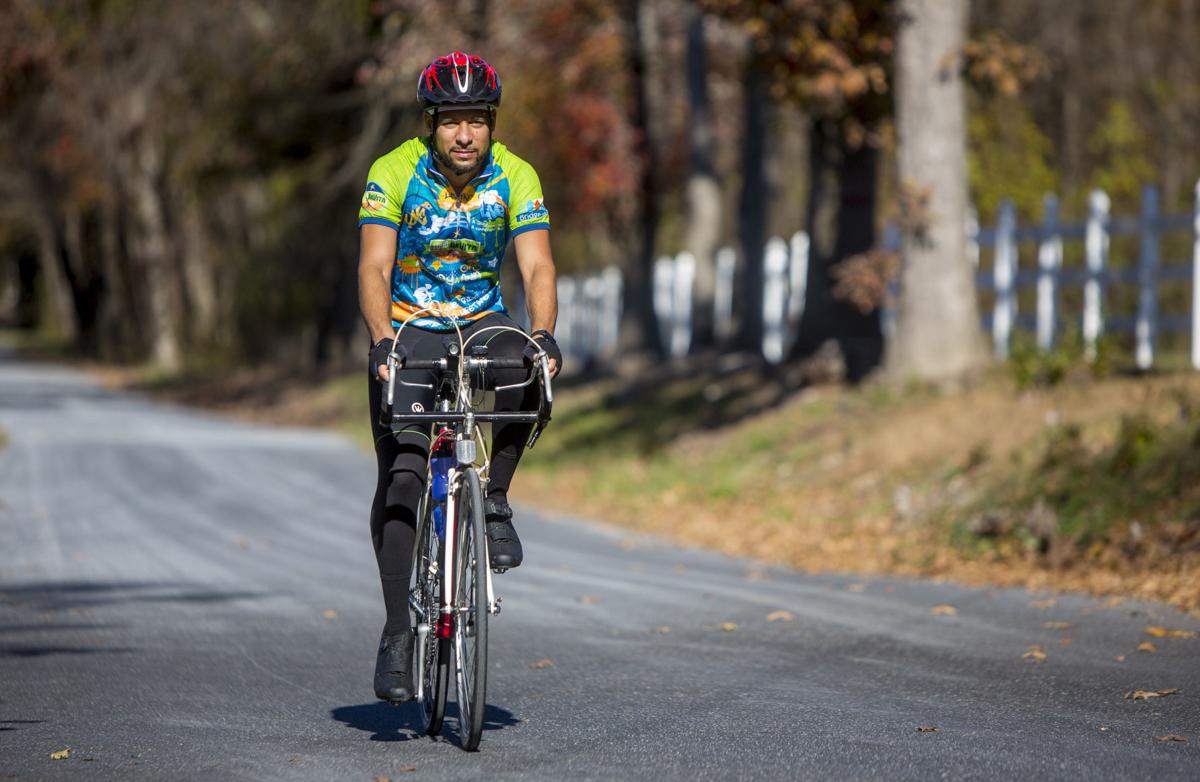 Manuel Castro, of Grottoes, rides his bicycle through town. Castro rode in the Tour DaVita in September to raise funds to help fight childhood kidney disease.

After years of working in the nephrology field and riding hundreds of miles advocating for kidney awareness, Castro said he felt ready to race every year, but there was one kidney patient Castro had never prepared to help.

When Castro’s wife, Myrelsie, was pregnant with their second child, doctors recognized complications during pregnancy and had a plan in place upon delivery for their son Josiah’s chronic kidney disease. After being monitored for a month in the neonatal intensive care unit, Josiah was discharged and seemed relatively healthy.

At age 5, studies showed his left kidney was deteriorating and not contributing to kidney function, causing the other to drastically swell. Josiah needed a transplant. Fortunately for Josiah, he was not the only one.

The National Institute of Diabetes and Digestive and Kidney Disease reports from 2015 state that 14% of Americans suffer from chronic kidney disease, and the National Kidney Foundation reported in 2013 that Virginia has 1,336 dialysis patients per million population.

Around the same time in winter this year, 22-year-old William Johnson of Chesterfield County also depended on a kidney transplant to save his life. Taking to the local news station, Johnson shared his story, and people rushed forward to sign up and donate their kidney.

“Out of that, a lot of people came up just wanting to donate, and my son was able to get a kidney out of all the people that came up. There was a perfect match for my son,” Castro said. 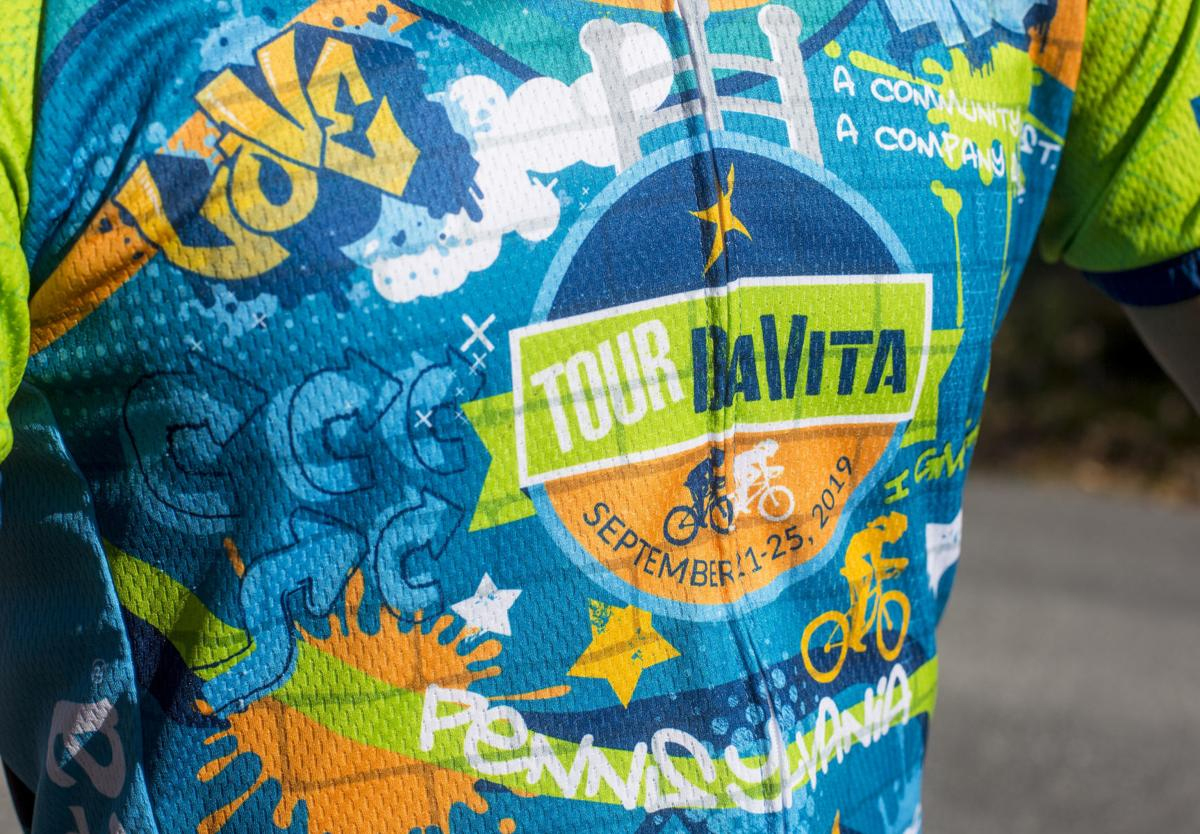 DaVita, an international kidney care facility with a center in Harrisonburg, has raised $8 million through the annual bike tour since 2013 for sister operation Bridge of Life, which provides educational and medical kidney care globally.

Those suffering from kidney disease have to monitor their phosphorus, sodium, protein and potassium levels. As a kid on the renal diet, simple childhood joys like greasy pizza from chain restaurants or a simple side of mashed potatoes were previously unthinkable.

Josiah received his transplant in March and has since slowly begun learning what it means to be a 7-year-old without restrictions. Castro said he is overjoyed at his son’s recovery, but he is also astounded looking back at how drastically the disease transformed his son.

Since Josiah received his transplant earlier this year, Castro said he has been in perfect health, and when the 2019 DaVita Tour registration opened, Castro was reinvigorated to ride.

“I signed up this year to do it and honor my son and everything that he went through and for our patients as well,” Castro said.

In 2019, Castro raised $1,180 for Bridge of Life before his ride. According to Bridge of Life, this year’s race allowed it to complete 42 international medical missions and domestic kids’ camps and train 684 clinicians in 12 countries, which is projected to impact 9,789 lives.

“First ride … I was doing it for the kidney awareness and just for the fun of doing it, you know, being able to talk and outreach,” Castro said. “This one had, I think, had a bit more meaning just because of everything that my family has gone through. So I would say I was more emotionally intact with this one because everything that he went through.”